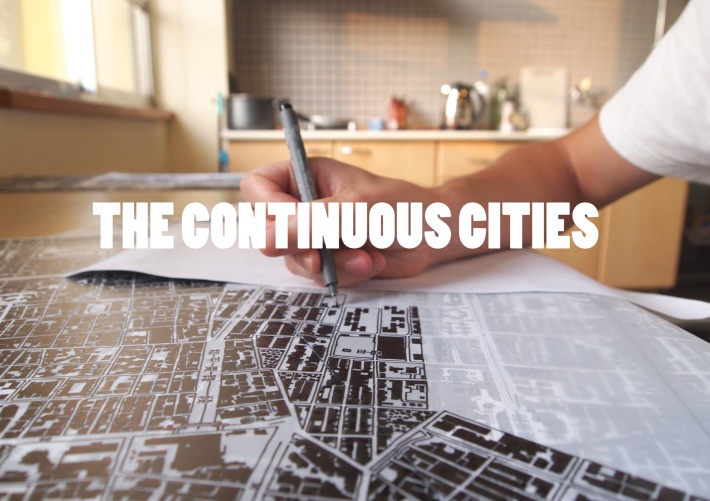 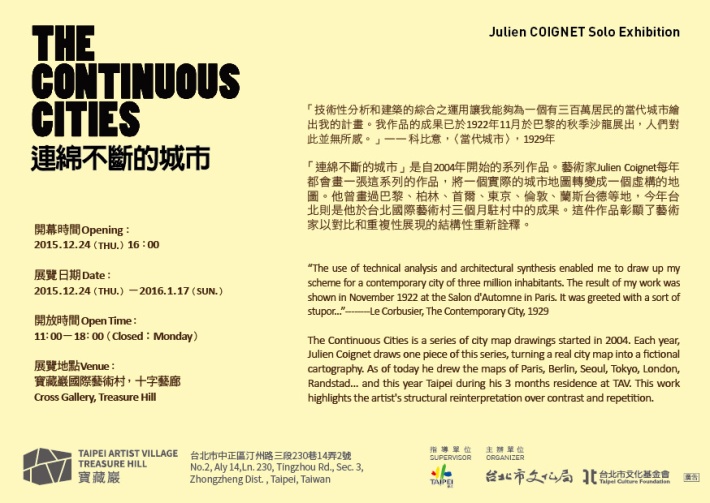 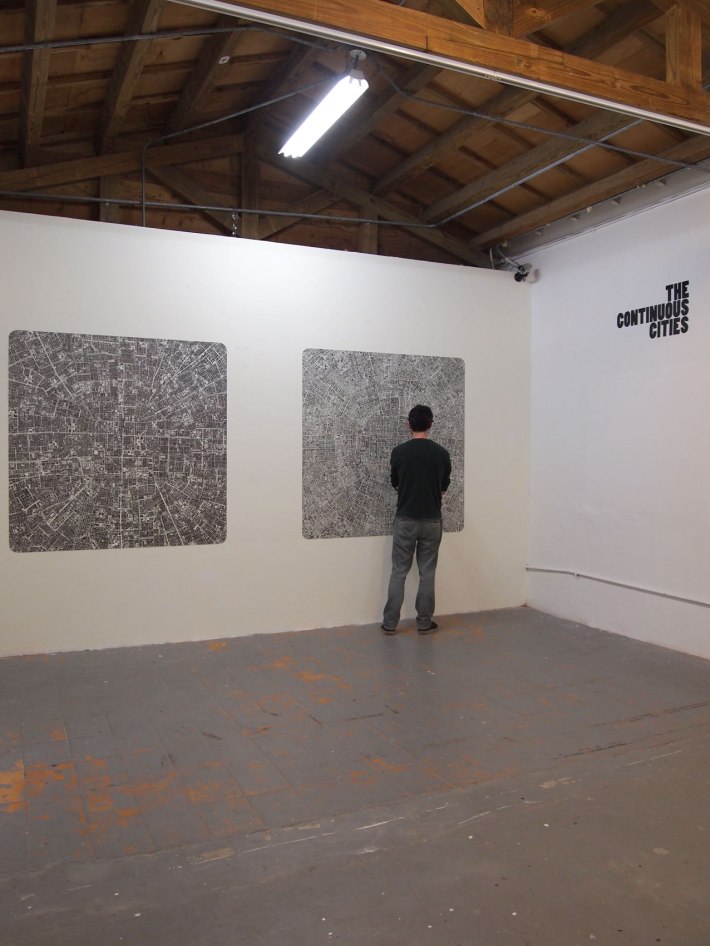 By Somi Sim, Independent curator based in Seoul

As soon as Julien Coignet arrived in Taipei, he bought a map of the city. After gathering the map and displaying it on the wall of his studio, he embarked on the process of drawing a map from the original city-map. The result of finely drawing a 150×150 cm map of Taipei with 0.6 mm ink pen for 2 months was the 20th drawing of The Continuous cities. Beginning in 2004 and growing by 1 or 2 pieces each year, this series encompasses large European cities such as London, Paris, Berlin and Brussels, and now continues onwards to Asian mega-metropolises such as Taipei, Seoul and Tokyo. The drawings look like real maps because each one was drawn partially on polyester paper, but in reality each work is a reconstructed fictional map, a non-existent imaginary cartography. This exhibition is the first to showcase The Continuous cities as the only theme. However, that does not mean the exhibition merely displays past drawings. The exhibition will extensively feature, along with 2 additional map drawings, an archive of the artist’s photographic research on the city formation process, as well as reference materials. So why is the artist drawing a fictional map of actual urban structures of every city? This begins with a critical view of the urban fabric, growing under the global system. 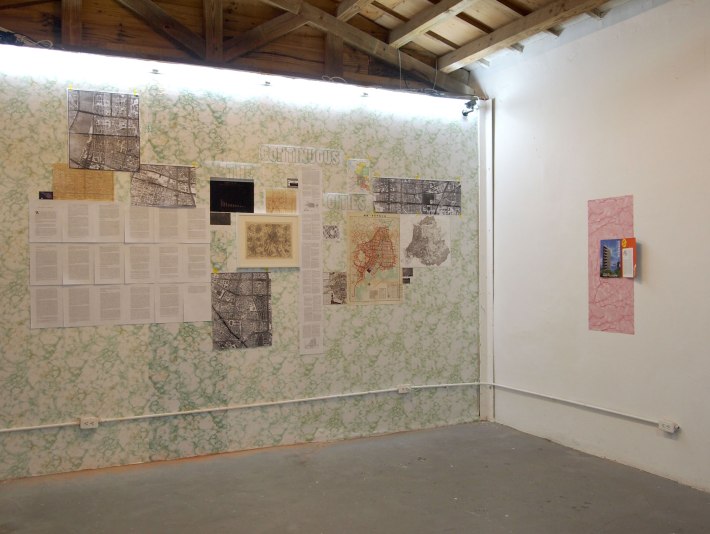 The exhibition will feature Taipei, whose map was created during the artist’s residency, as well as Tokyo. The approach of the two cities starts from a social background on modern city formation in Asia. Both maps include roads extending in all directions from the center, and high density of closely knitted buildings. Coignet’s map drawings selectively choose the ‘ basic elements of cities’ and rearrange the districts, but the overall urban fabric is organized in such as way that it is easy to get lost. “Man, being too small, on this scale, is thus absent from these maps, he disappears into space in an endless maze.” The quote calls forth the image of a densely packed future city. Coignet reconstructs the image of Utopian future cities in ‘science fiction’ through each city’s urban fabric. Though exploring the logic behind city formation, the map is completed in a nonexistent fictitious structure.

Modern city construction begins with hopes for city reformation, increased housing, economic revival, creation of green areas and other Utopian dreams. However, if we look at today’s mega cities, we can observe that the urban fabric worldwide has become uniformly similar under the influence of the apital. The imaginative cartography of map drawing includes the fabrication of urban development and expansion. The archive materials on the wall comprise of the maps, book pages, slogans, graphs and images that inference such city formation process. From Paris, reconstructed under Haussmann in 1853 and the model for cities worldwide, the mega-city projected by Le Corbusier in 1925 for a population of 3 million, Tokyo rebuilt after bombing, David Harvey’s ‘The Right to the City’ to Edward Soja’s city theory, the archive sharply examines the relationship between city and capital and the socially produced city structure. Coupled with architectural ideals, the city’s new paradigm continues to bring forth the expansion and growth of the global city. This idea of the artist is even reflected in the marble patterned wallpaper utilized during installation. This material, commonly used in new buildings in Taipei, aims to imitate premium life, projecting social desire, a fake material covering the surface of the city. The logic of capitalism continuously upgrades the urban fabric, expanding the space of exchange value. Such city pattern repeats on large-scale, rearranging and repackaging the city. The dense and compact drawings, through the imaginary arrangement of the urban fabric, raise questions regarding ‘The Right to the City’, the sharing life community that is the city. The reason The Continuous Cities carries on is right here.